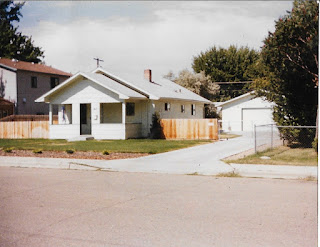 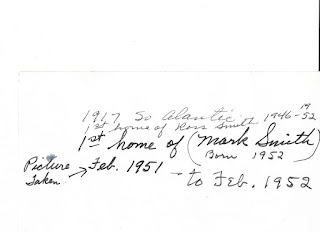 Even retired, even quarantined even during the epidemic it's hard to adjust to the day of the week following national holiday. I guess some things never change. Of course there is no going into my Assist, Inc. meeting however there were some hopes that perhaps David would do a remote meeting but that was not to happen either I think the holiday was to blame. I know I often had quarterly meetings which invariably followed a three day weekend. I guess the social distancing it just makes the matters worse. So I spent a good part of the day actually being productive scanning images onto the hard drive. I finally gotten all software working properly. Just for a break I also sprinted across the street for some essential shopping.

This image has been laying around my sink in the bathroom for a couple days and I finally picked it up yesterday and examined it closer. I scanned the image in a couple weeks ago and I just briefly looked at the image and checked out the back inscription. There in my mother's handwriting was a short commentary that I had lived in the image of the house I first year of life. I really didn't pay much attention to the image at the time that I scanned but when I looked at it again when I shave the other day I noticed there is more to the inscription that my brother, Ross had lived there from the time he was born 1946 and that we moved in with my dad I guess in 1951 to the house on Latah Street. Now, I've gone back and re-looked at this image and am beginning to get some kind of a weird feeling of nostalgia for this little cottage. Even though I lived there for just one year after I was born I must've had some kind of feelings about the place. The address for this little houses 1917 South Atlantic St. I'm not sure and I'll have to do some research on this but my grandparents lived close to this area. I don't know if that was the reason my mom was living there because I think she was married at the time she delivered my brother Ross. And she had to be living there when my grandmother brought my birth mother home to Boise to ride out the last days of her pregnancy. I assume Doobie lived with my grandparents during this period. It's too bad I wished I could of gotten the image of when my mom lived there in the middle of the last century. That would've been cool. I'm just amazed that just an image of something long gone to bring these feelings about this kind of weird. I would love to go knock on the door and see if whoever lived there now would allow me to wander through the property and see what the insides of the house look like. That of course will never happen adjust what if?