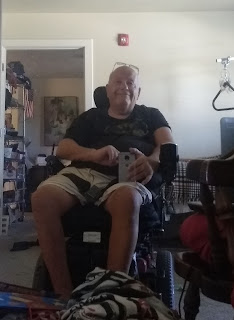 This day has totally slipped away from me. It's after 6 PM and I'm just now getting to my blog and I still have not pumped my arm bike and I really need to do that today. I adjusted way to many calories and almost feel defeated as far as any weight loss which might've been achieved this weekend. I don't know if I will have the energy after blogging the rollover to the bike and pump but I might give it a shot. You see I still have drawing to work on. I can't believe how much this drawing classes taken over my life, I hope that's healthy. I do like it however when I'm in drawing mode getting there is another question even now I suspect I'm using blogging as a tool to get away from having to do my homework.

I'm wearing one of the dead man shirts I got from the sharing shelf this week. I thought I had reported something on that but I guess I haven't. Earlier the week I was amused when I pass the sharing shelf that was piled high with folded clothes, good clothes. There was even men's clothes, T-shirts, shorts, slacks, sweaters and on and on and on. I was amazed to find a number of 42's in the pile and shorts that were 42 waste and 44 waste. Granted the 44 waste is huge but no one will know until I stand up and that's not going to happen anytime soon. Long pants were 42s as well but they are kind is short on the and see what the out see my power that works. Since I rarely wear long pants and the longer it's not a big deal in fact one of the women at the pile with me suggest and I just cut them off. I could do this but the slacks are such nice slacks I would hate to do so. The T-shirts or another question. But not the 3L's and 3X's which I have been wearing lately but there are some 2X's which I can wear if I want to spend the day tugging down on my shirt and risking showing belly. But the T-shirts are nice but I'm willing to commit to that challenge though it's somewhat painful. In fact the day for the first time Ie reality of the situation is I don't wore one of the T's which sort of goes on nice but creeps up on my belly real quick if I don't watch out. I got three or four shirts some gigantic shorts which I think will help me out for a while. Though I have some forgotten into the whole idea of buying some new clothes and keeping new clothes looking good which maybe makes me look good.

It's funny how we see ourselves in our minds I. I often think I look good wearing something and The reality of the situation is I don't.see recent blog “koko” about me wearing a black watch cap. I've always loved the color red I don't know why but I do. I really like deep red felt tips for drawing instruments. Like Red Socks, somewhere in this blog I've written about my “victory” socksWhich I used to wear after wrestling in the seventh and eighth and ninth grades. I like red sweaters, I like red parkas I like everything red. I specially like red T-shirts, turtlenecks and windbreakers. It was a shock for my third wife informed me that maybe I didn't look so good in red. I believe her it was hard for me to accept but think she's right. In fact, she is convinced me that my color is blue which totally leaves me cold. I guess fortunate for me the poor individual who passed away and whose family member donated all the close over to our facility did not fancy red but he didn't fancy like colors either so that was a positive. So now, I'm going to pull off this really sort of tight, blue T-shirt And crank my arm bike for 30 minutes then back to drawing